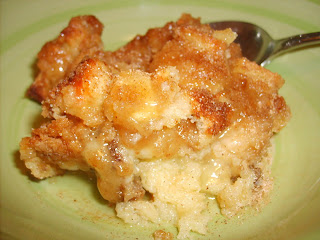 Yum! Do you love a good, warm, cinnamon'y' bread pudding on a chilly Fall day? This is another good Autumn recipe, and a good way to incorporate some of those apples that you've been picking. We are in the middle of our annual Faith Promise Missions Conference and we are feeding the missionaries dinner each night. We thought this one would go over well, and it surely did.
The original recipe had twice the amount of sugar called for here. It was good, but way too sweet. So we reduced the amount of sugar (since we were working with a sweeter bread). And the results were WONDERFUL! I love this because it's almost like eating baked french toast, but better. You will love the crispy, crumb topping too.

Preheat oven to 350. Grease a 9 x 13 baking pan. Place bread cubes in pan. Mix together sugar, eggs and milk in a bowl, add vanilla. Pour over bread cubes and allow to sit for 10 minutes. Sprinkle diced apple evenly over the top. In a separate bowl, crumble together the brown sugar, flour, butter and pecans. Sprinkle brown sugar mixture evenly over the top. Sprinkle liberally with cinnamon sugar mixture. Bake for 35 - 45 minutes, or until set (no longer 'jiggly' in the middle). Remove from oven.

For sauce: Mix together sugar, butter, eggs and vanilla in a saucepan. Over medium heat, stir together until sugar is melted. Add apple juice and stir well. Pour warm over bread pudding. Delicious served warm with ice cream! Man! I love Fall! Don't you? I love the colors - the deep orange hues, the red, the gold, green, I love it all. The crisp Fall air. Warm, comfy sweaters. Fleece blankets. Fuzzy socks. Hot chocolate. I love the smells of Fall. Baking. Pumpkins. Apple orchards. Apple cider. Apple pie, apple crisp, Apple cake!! haha My daughter has been asking for this for a few weeks now. I finally surprised her with it tonight. If you like apple desserts, this one won't disappoint! Don't let the stiff, cookie dough like, batter scare you. The chopped apples. once they bake, provide just the right amount of needed moisture in the cake. This is soooo good with a hot cup of coffee on a chilly, Fall day! It's SO moist and the sugar creates a yummy, crispy top.

Preheat oven to 375.
Cream butter with sugar, add eggs and vanilla and mix well. In separate bowl combine flour, salt, baking soda, baking powder, cinnamon and nutmeg. Stir or sift to combine. Add to creamed mixture and beat with mixer until well combined. Don't be afraid of the stiff, cookie dough like batter, the apples will cook up and provide enough moisture in the cake. Use a good heavy wooden spoon and fold apples evenly into batter. Spray a 9 x 13 baking pan with cooking spray and spread batter evenly into pan. Bake for 45 - 50 min at 375. Remove from oven and serve warm with desired garnish.
I sprinkle with powdered sugar. You could serve it with a dollop of whipped cream. 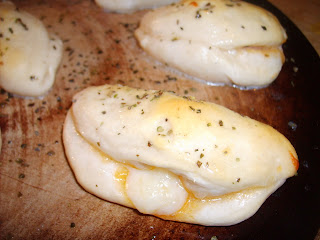 I made these last night to go along with our Italian chicken and rice soup. They are so yummy and so quick and easy to make. These would also make a tasty Sunday night snack for the family or the monthly ladies meeting, or any other group of people you may happen to have over for a fellowship. And biscuits are always on sale at the store. I just used the refrigerated 4 pack regular buttermilk biscuits. The original recipe didn't call for mozzarella cheese, but we are big cheese hounds around here and just look for ways to add it to recipes! haha And I'm telling you, I wouldn't make them without it!


Roll each biscuit out flat (don't worry, it will puff back up when it bakes). Place 2 pepperoni in each half (I overlap the pepperoni on top of each other, about half way) and a pinch of shredded mozzarella cheese. Fold the biscuit in half and pinch shut along all edges. Place on greased cookie sheet. Sprinkle with Italian seasoning if desired. Bake according to package directions. When they are done, brush with butter and sprinkle with garlic. While these are baking you can heat some marinara sauce to dip them in.
I served them with soup and they were so yummy that way too! 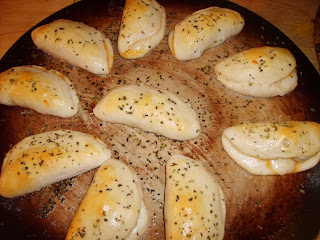 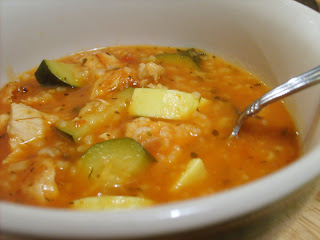 Fall is here! My favorite time of year! Time for some yummy soup recipes. Soup just warms you up on a crisp Fall day. This recipe is ridiculously simple. But oh so tasty. If you are having a busy day and your schedule seems rushed, you should add this one to your menu. It goes together in a snap. Especially if you already have leftover, cooked chicken. I cooked my chicken on my Foreman grill, while I threw the rest of the ingredients together, and it all came together right on time. Don't be afraid of the 'spaghetti sauce' in the recipe. I was a bit nervous to add it too, but then I reminded myself that it's only tomato sauce with the seasonings "already in there!" (Little plug for Ragu there! haha)

1 (49 oz) can chicken broth (I have had trouble finding these big cans of chicken broth lately. Now they are selling it in the 32 oz size box. (This is why it's good to have homemade broth on hand). Anyway, I just mixed up 2 cups of hot water w/ 2 tsp of chicken soup base, and added it to the broth, and it was fine.
1 (26 oz) Spaghetti sauce (meatless)
1 1/2 cups cubed, cooked chicken
1 small zucchini, cubed
1 small summer squash, cubed
2 Tblsp. minced fresh parsley
1/2 tsp. dried thyme
3 cups cooked rice
1 tsp. sugar