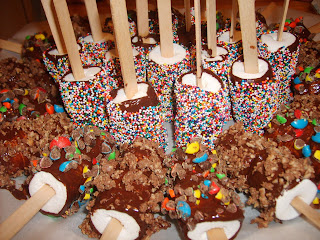 Here's a fun treat to make with the kids! The original recipe just called for sprinkles, but we decided to try a few other coatings. One that we tried was chopped up Kit-Kat bars. The end result was something similar to a S'more! The kids loved them. They go together super quick and easy. This would be fun for Grandma to do with the grandbabies when they come for a visit. I made them for our Jr church kids and they gobbled them up. Be creative with your toppings and be sure to stop back by and let me know how they turned out for you!
*The pops can also be customized to match school colors, holidays, or special occasions by rolling them in coordinating colored sprinkles, such as red and green for Christmas, or orange and yellow or red for Fall.

In a shallow microwave safe dish, combine the chocolate chips and oil. Stir and heat for 30 seconds at a time, until melted and smooth. DO NOT over heat as they will get hard on you. Thread two marshmallows onto each wooden stick. Use a pastry brush and dip it into the melted chocolate. 'Paint' each marshmallow with the melted chocolate (this works MUCH better than dipping or rolling, and helps to keep the coating from 'sliding' off afterwards). Roll in sprinkles, coconut or chopped nuts or coating of choice, such as chopped Kit-kat bars, chopped M & M's, etc... Place on waxed paper lined baking sheets. Chill until firm.
Posted by Starr at 12:43 PM 7 comments: 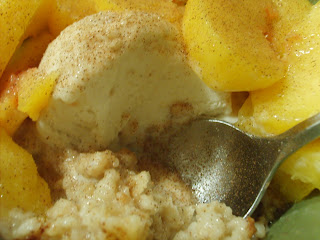 If you're not a fan of oatmeal, you will be after trying this treat! What a grand way to wake your kids up in the morning.... tell them they are having ice cream for breakfast! We all love oatmeal this way. But I buy the Carb smart ice cream to keep it lower in sugar. Are you a fan of the hot / cold duos? This one will be right up your alley then. Give it a try and let me know how you liked it.

Prepare your oatmeal according to package directions. I like the quick oats that cook in 1 minute. Hubby likes the old fashioned oats.

Place prepared HOT oatmeal in bowl, top with butter, sprinkle with brown sugar. Place scoop of ice cream on top of hot oatmeal. Top with sliced peach and sprinkle with cinnamon/sugar. ENJOY!
Posted by Starr at 8:28 AM 1 comment: 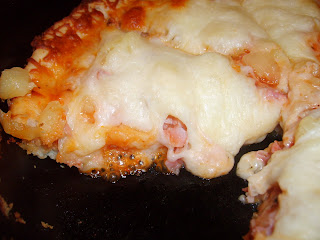 Have you ever baked homemade pizza in a cast iron skillet? Oh my soul! It is so YUMMY!
The crust gets crispy on the bottom but stays moist on top. If you have an iron skillet, you simply MUST try this some time! You won't be disappointed and you'll probably never bake it on a pizza pan ever again!

It's good to "feel" out your dough. Start with the yeast in a mixing bowl. Add the warm water, oil sugar or honey and let everything dissolve together. Begin adding flour. (This can be done in a mixer, but I prefer to mix by hand, adding the flour a cup or half a cup at a time.) After mixing in about half the flour, add the salt. Mix in the rest of the flour, and when dough can be handled without sticking too badly, begin kneading by hand until soft and elastic, about 12-15 times. Let it rest for about 15 minutes. Punch it down, knead and let it rest again, if you have the time. After the second rise, form it into whatever you want (loaf, rolls, etc.) and bake in 450 deg. oven until golden brown. But this time we're forming it into our pizza dough. So lay it on the counter and begin rolling it into a circle big enough to fit your cast iron skillet on the bottom and up the sides a little. Grease your skillet heavily with Crisco. Pat dough into skillet and push up sides of the pan a little.

Spoon the pizza sauce (or pasta sauce, doesn't matter) evenly over your dough in the iron skillet. Top with 1 cup of the shredded mozzarella cheese. Layer on your ham and pineapple and top with remaining cheese. Bake at 400 for 15 minutes or until cheese is melted and bubbly and crust is light golden brown on the bottom.

*Feel free to add more or less ham, pineapple or cheese, according to your taste.
Posted by Starr at 6:08 PM 2 comments: 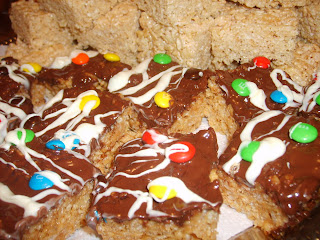 We had a cookout after Sunday night service this past week. Everyone was asked to bring a side dish to share. I had a ton of Rice Krispie's for some reason and figured I'd throw together a batch of Rice Krispie treats (which I did). But I still had a ton more cereal! So I whipped up a batch of peanut butter rice krispie treats. They were gone in a flash! One minute the platter was full, I turned my head and a minute later it was empty! LOL Who doesn't love a Rice Krispie Treat?


1. In large saucepan melt butter over low heat. Add marshmallows and peanut butter and stir until completely melted. Remove from heat.
2. Add rice krispies cereal. Stir until well coated.
3. Using buttered spatula or wax paper evenly press mixture into 13 x 9 x 2-inch pan coated with cooking spray. You could also wet your hands and pat it down into the pan good and tight.
4. Place the chocolate chips and the oil into a microwave safe bowl and heat for 15 - 30 seconds at a time, stirring each time, until melted. Spread evenly over peanut butter rice krispie treats.
5. Sprinkle with M & M's
Optional: Melt 1/2 cup white chocolate chips w/ a teaspoon of oil in the microwave and drizzle over the top.
Cool. Cut into 2-inch squares. Best if served the same day.
Posted by Starr at 8:21 PM 4 comments: 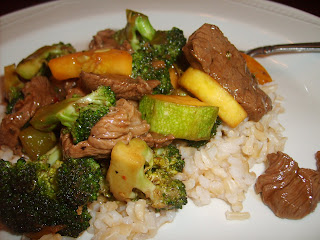 This dish was amazing! I found it in the Biggest Loser Family Cookbook that I just purchased at Barnes and Nobles. This even got me a high five and knuckle bump from my Honey! He LOVED it! It is so very simple to make, but packed with a ton of flavor. A little on the spicy side, but not too much. We all have different tolerances for spice, and this pleased the whole family. This one will be making an appearance on our family dinner table again and again! I purposely made extra with lunch in mind for the next day. But..... after dinner was 'over' everyone just sat around 'picking' at the leftovers in the dish, until it was completely gone. It was just so tasty. 2 thumbs up from the whole family!

*This dish cooks up quickly, so be sure to have all of your ingredients prepped before you start. Watch the meat - if you overcook it or the pan isn't hot enough when you put it in, the beef could turn out tough.
I also added sliced zucchini and summer squash to this dish and it was DEElicious!

In a large bowl, combine the steak, garlic powder, salt and pepper and toss until will combined.
Place a large non-stick skillet or nonstick wok over high heat. When hot, mist it with the olive oil spray. Add the broccoli and garlic and cook, stirring, for 4 - 6 minutes, or until the garlic softens and the broccoli is heated through and crisp tender, being careful not to burn the garlic. Transfer to a large bowl and cover to keep warm.
Return the pan to high heat and add 2 tsp of the sesame oil. When hot, add the steak in a single layer and cook, stirring occasionally, until lightly browned on both sides, 2 - 3 minutes. Return the veggies to the pan with the meat, and remove from the heat. Add the Szechuan stir fry sauce and mix well to coat. Divide among 4 bowls and serve. 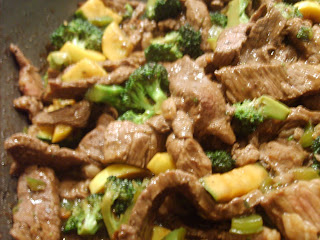 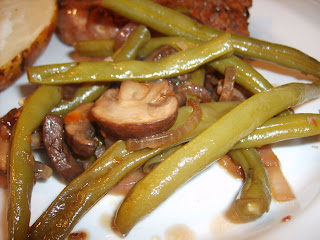 Boy! Where does the time go?! I need to start posting some new recipes on here that we've tried and enjoyed. In our quest to eat healthy, I'm scouring 'light' cooking books and magazines for new takes on veggies. Tonight we tried this yummy little dish called Asian grilled green beans. It was a real hit with hubby, who isn't a huge fan of veggies. It's spicy, so beware. If you tend to be whiner when it comes to spice, just use half the amount of crushed red pepper flakes. This one is a keeper, for sure.
* One thing I would like to try next time though, is stir frying this dish, rather than 'steaming' them in the foil packets. I like my beans a bit on the crisp side.
* You could also top this side dish with a sprinkle of heart healthy, toasted nuts to give it a nice crunch.

Directions:
In a large bowl, combine the first 5 ingredients.Add the beans, onion and mushrooms. Toss to coat.
Place the veggies on a double thickness of heavy duty aluminum foil about 24" square. Fold foil around vegetables and seal tightly. Grill, covered, over medium heat for 18 to 20 minutes or until beans are tender, turning packets over once. Open foil carefully to allow steam to escape.