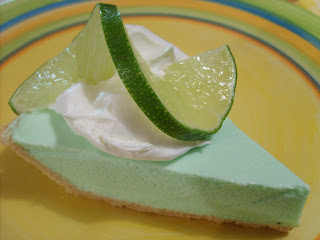 This recipe goes WAAAAAY back for me. My Mom used to make this when I was just a little girl. I don't know why I've always called it "key" lime cheesecake, because no key limes are used in it! Maybe it just sounds better than plain ol' lime cheesecake! LOL At any rate, this is an old family favorite. For those of you that have been following my blog, you will notice I've been MIA for a few weeks. My mother got very ill and passed away last week. I've been doing a lot of traveling back & forth to my old home town, for the past couple of weeks. I made 2 of these pies for the funeral luncheon afterward. I heard several people talking about the lime cheesecake earlier in the week and thought it would be a nice way to remember her.
This one is super easy, I actually do a shortcut on this one that my mother never would have done. I use Cool Whip in place of the dream whip. When I have the time to fuss over it, I'll use dream whip - it does make it heavenly creamy!

In large mixing bowl, pour boiling water over lime jello. Stir well until jello is completely disolved. Carefully drop cream cheese chunks into hot jello. Stir briskly with whisk until cream cheese is completely stirred in. You shouldn't see "chunks" of cream cheese anymore. Now add 4 or 5 ice cubes to it to cool your jello mixture down a bit. Stir until they are disolved. Carefully fold in the Cool Whip and stir until combined. Pour into prepared graham cracker crusts and refrigerate for 2 or 3 hours or until set. Garnish with more cool whip and fresh lime slices.
Yeild: 16 servings
Posted by Starr at 8:30 AM

I'm so sorry that you lost your mother. Food has a wonderful connection for us as we associate certain things with people and loved ones - what a nice tribute to your Mom to make her signature pie. I've missed you and was wondering where you were - but I'm certainly sorry to read why. Please accept my condolances. heartfelt.

I am so sorry for your loss of your mother. May you know the peace and strength of the Lord as He upholds you at this difficult time.

So sorry to hear about your Mom, but what a nice way to remember her. This recipe sounds really good.
Prayers, Bo

Oh, I am so very sorry to hear about your Mother passing away! I lost my Mama when I was 16 years old and know how painful that can be. I had wondered if you were just really busy at church or something after not seeing your blog updated for quite a while. So sorry that it was a death in your family! I pray the Lord will give you special peace and comfort in the days ahead.

The lime cheesecake sounds delish! I am trying to not make many sweets right now because of health but sounds like something that would be great for a special occasion soon!

I am sorry to hear about your loving Mom. I love quick and easy recipe especially with the hot summer months approaching. This will be refreshing. Thanks for sharing your Moms pie with me.
Joyce

I'm so sorry to hear about the passing of your mother! May God bless and encourage you during this tome.

This recipe looks really good, I got a Key Lime Pie recipe from old days down in Miami, FL, it is delicious too, I am gonna try this cheese cake, thanks for posting.

Starr, Sorry to hear about your
Mom. I know words really do not help in a time like this. But we do have hope that we will see them again. wish I waqs close so I could give you a big hug.

HI! I love the recipe! ty. I have one quick question though...the 8 ounces of cool whip..is that 8oz prepared or liquid, pre-whipped?

Hi Friend - Thanks for stopping by my blog. I'm sorry I didn't see your post from way back in June. But that is exactly as it states: 8 oz of prepared Cool Whip (like they sell in the freezer section at the grocery store).
Enjoy!

Has anyone tried to freeze this Key-Lime Cheesecake, for storage & future use? Curious what it's like when thawed? Judy

Dear 'Anonymous' - I've not tried to freeze this particular cheesecake, but I do have a similar pie that I make with cream cheese and fruit and it freezes well. I serve it still partially frozen. If I were to try to freeze this dessert, I would serve it the same way.