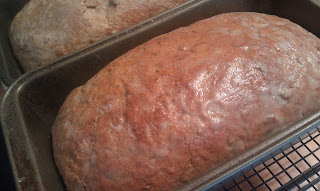 With bread at almost $3 a loaf, I figured it was time to try my hand at learning the skill of bread making. This is one area that I have not ventured into much. I suppose it's because with the carb content, we don't eat a lot of it. But we constantly have need of it since we often have family and guests in for fellowships and meals. This was an easy recipe to make, although a little dense for my taste. It has molasses and oats in it, which gave it a delicious flavor. I was hoping it would have risen and had a lighter texture. I think I either added too much flour at the start or it may have been in my kneading "technique." At any rate, I will make it again though, just so I can "master" this recipe! The first time I made cinnamon rolls I wasn't happy with them either. But now I can make them with my eyes closed! You learn as you go - what to do and what not to do, to get a good product.

In a large bowl, pour boiling water over oats. Stir in butter and molasses. Let stand until mixture reads 120 to 130 degrees, stirring occasionally.
In another bowl, combine 3 1/2 cups flour, yeast and salt. Beat into oat mixture until blended. Stir in enough of the remaining flour to make a SOFT (not stiff) dough. Turn onto a floured surface, knead until smooth and elastic (about 6 - 8 minutes). Place in a greased bowl, turning once to grease the top. Cover and let rise in a warm place until doubled. About 1 hour.
Punch dough down. Turn onto LIGHTLY floured surface and divide in half. Shape into loaves. Place in 2 greased loaf pans . Cover and let rise until doubled - about 30 minutes.
Bake at 375 for 35 - 40 minutes or until golden brown. Remove from pans to wire racks to cool. Brush tops with butter to soften crust.
ENJOY!