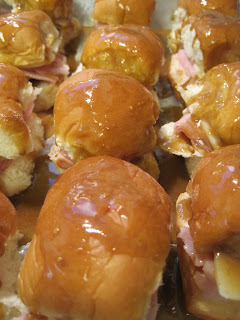 I know, I know.... Don't grill me on the meaning of "slider." I've read all the debates on the true meaning of a slider. The trend now though, is that any mini sandwich can be called a slider, so the name stands. You've probably seen this recipe circulating on the internet. Some are calling them "funeral" sandwiches. They are way too good to be saddled w/ such a sad name though. When I first ran across this recipe, I was intrigued but also a bit skeptical because of the sauce recipe that gets poured over the top. My skepticism won out and I second guessed the sauce recipe. I timidly "brushed" the sauce over the top of the buns, rather than pouring it over the top. One warm, delicious bite and I immediately regretted not using all of the sauce! I have made these several times now and every time, I get asked for the recipe. I've made them for a Superbowl party, 2 funerals, a birthday party, etc... They are just a good all around, easy sandwich to fix and it serves a large group easily. I have used different varieties of meat and cheese to make these. The roast beef and provolone is a good one! Turkey and cheddar. Ham and swiss, etc... Plus..... one of my favorite features - you can prep them the night before! Oh yeah! A Pastor's wife's dream recipe! :-)

Cut rolls in half and lay bottoms on baking pan. Layer the deli meat slices, then cheese and place the top half of the buns back on.Make sure the rolls are separated a bit on the pan, so the sauce can run down the sides of the sandwiches.
Mix together the melted butter, Worcestershire, mustard, brown sugar and onion powder. Pour the whole works over the buns, drenching each one. Cover tightly and marinade anywhere from 4-24 hours.

Preheat the oven to 350 degrees. Bake for 15 minutes,uncovered,or until cheese is melted and bun tops are a bit golden.
Lastly - have recipe printed and ready to hand out! :-)

Wow - that sounds so good! :) I was worried that the bread would get soggy a little? But having read your glowing recommendation of this, I will surely be trying it! Take care! :)

You won't be sorry! They are DEElish!

Just printed out the recipe to try them in the near future! :-) Thank you!

Thanks for stopping by Jolene! Let me know how you like them. They are a fave here!

I love these sliders! My family favorite

I made these last weekend not knowing what to expect and my family (mom, dad, grandma and two teenagers) ABSOLUTELY FLIPPED OUT! They were incredible and I was begged to make them again this weekend! This is a keeper!!!
I marinated them about 4-5 hrs.

A friend made these NYE, 2015. They were soooo delicious. I wish she had handed out the recipe! ;) But I have the recipe now and Ham, Just need some rolls will be making this week :)

I did not have time to marinate these and was looking for something quick. I just brushed the tips generously with the mixture and straight into the oven. My kids were sceptical, but after trying them, they preceded to inhale them ALL! Great recipe sms I will plan ahead and marinate them next time- because there will be a next time.